Reflections on Medicare from the National Academy of Social Insurance 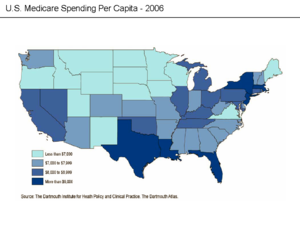 Here is a document that I commonly refer to that was created by the NATIONAL ACADEMY of SOCIAL INSURANCE: you will NOTE this is NOT a republican or democrat document, members of the panel are from all parts of this spectrum and political arena, it’s contributors and panelists are the who’s who in the academia, insurance, and medical world. From Yale to Johns Hopkins to Princeton, Chicago, Wellpointe and more. This document called “Reflections on Medicare” was published in 2001 and it also includes / recounts the transcription of a discussion made in 1992 with Robert M Ball (Commissioner of Social Security from 1962-1973) & Arthur E. Hess (Director of Health Insurance 1965-1967) … (the years when Medicare was passed and rolled out) … in which on page 17 of this PDF document or page 3 of the conversation, you will find a very interesting commentary about the creation of Medicare Part B and the unintended impact on our entire health care system …. basically it says that Part B (outpatient services part of medicare) was literally created overnight as an afterthought as part of a ways & means committee with NO actuarial studies of the impact that it would have on the delivery of healthcare, this one action was the single most important shift into the change of our entire healthcare system and the delivery of services and how they are paid. This is the exact kind of rash, impulsive, foolish “leadership” like Pelosi stating that we need to “pass the bill so we can see what’s in it.” not realizing that there is far more at stake that impacts not only our healthcare system, but a systemic impact and overflow directly into our entire nations economy. I DARE YOU TO READ THIS https://catalistconsulting.box.com/shared/static/d455890f38020866b467.pdf 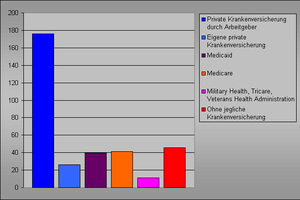 US residents with employer-based private health insurance, with self insurance, with Medicare or Medicaid or military health care and uninsured in Million; U.S. Census bureau: Income, Poverty, and Health Insurance Coverage in the United States: 2007 (Photo credit: Wikipedia)

Call 317.441.4321 or CLICK HERE to QUOTE the best Insurance Companies in your state. We specialize in Indiana, Kentucky, Ohio, Michigan, Illinois, Tennessee, North Carolina, South Carolina, Texas, Florida, Wisconsin, Pennsylvania, Georgia, Maine, Missouri, Mississippi, and Virgina. If you are calling from outside of Central Indiana, Dial Our Toll Free Number at 1 (866) 460.4321 and speak to a representative Live who can help you.